To nobody’s surprise, I have been following Dita Von Teese since I am 14. She has inspired my teenage and my early womanhood. Along with His Holiness the Dalaï Lama, she is the one that I can follow blindly as her message about self-love, self-creation and glamour resonates strongly within me.

From being an American countryside blonde girl, she created a glamour icon respected in the worlds of fashion, art, body positivity and dance. She is the unapologetic hard working woman we should all copy.

I couldn’t decide between New-Zealand and Australia when it was time for me to pick a destination after Asia.   But when I saw that the Queen was about to tour in Aussie, my choice was made. My amazing parents gifted me the golden ticket for my birthday and I then applied to get a VISA for Australia. While waiting for the date to come, I have settled in Melbourne and took another leap in the unknown by starting Burlesque fan dance and art of the tease class at The House of Burlesque.

The show took place in Saint-Kilda, at the Palais Theatre located next to the beach and opposite Luna Park. It was a warm evening when a dapper crowd gathered in the backpacker’s neighboorhood of Melbourne. The ladies and gents were elegantly dressed according to nostalgic trends from the past. Flowers in the hair, vintage gowns and 1950’s updos were present. I was in my element.

As a long-term traveller, I couldn’t bring along my overly glamourous wardrobe with me so I opted for an open back evening dressed with sheer legs.  It is my go-to when I need to dress-up for the occasion or impress a date. I paired it with a vintage-inspired kimono and black classic heels. I went for a Gibson updo with an S swoop in the font and a pearl necklace. Simple but classy.

The theatre seemed like it has never been touched by time since the late 20’s. The dome ceiling of the Auditorium and the gigantic windows on the side sets the perfect ambience for a Burlesque night. Even if the seats were not the most comfortable, it was a whole experience to see Dita in such a historical venue. I had the immense luck to be seated in the orchestra section and was able to enjoy the show to its fullest. Thanks again Mom & Dad!

The Art of the Teese was one of the most thrilling Burlesque show I have ever seen. Hands down.

A blonde Dita opened this marvellous night with her renowned Martini glass dance. Even if I knew this act almost by heart by having watched it over and over online, it didn’t fail to captivate me. One thing we don’t realise on tape is how shiny the Swarovski crystals are. All her props and costumes were made to blind the audience with sparkles. The last time I remembered being this much overwhelmed by shine was when I saw the crown jewels of United Kingdom.

The show featured one of my favourite act by the Queen called “Lazy”. It is the first time it is shown outside of the Crazy Horse in Paris. It is set in a very old-Hollywoodesque living room where Dita is lounging and turning all the calls away. She is assisted by her Vontourage to take off that marvellous gown.
We were also treated with her quite new act The Black Swan which was the perfect encounter between ballet and Burlesque. Dita herself often confess that she is a failed ballerina but still practising ballet on a weekly basis. The whole act was performed on Louboutin points.
The last act was her glitter cowgirl act. Sprinkling some rhinestones and sensuality over her all-American roots. The act was hotter than hell (not that I have been there already) but sweet as heaven (haven’t been there either..). it ended with a rainfall of glitters and confetti. What else?

On the Queen’s side was the Vontourage, namely Alek Palinsky and Elio Martinez, two talented dancers flattering the show’s aesthetic. The cast also included the athletic and flexible Ginger Valentine who revisited Dita’s signature act “My Heart Belongs to Daddy”.

The amazing Dirty Martini brought her electric presence on stage with a Carousel act. She proved once again that she was the one and only Empress of tassel-twirling. Gia Genevieve offered the audience a classic bathtub act fitting perfectly with her goddess-like figure. Finally, the Melbournian born and raised Zelia Rose took my breath away with her Josefine Baker-y act. She dared taking Burlesque back to the Charleston era and she was totally entitled to do so. Her moves were out of this world!

The only boylesque performer Jett Adore killed a sexy Zorro act. I had never heard of this artist before but I am not going to forget that name! His act was full of masculine energy, humour and professionalism. Although it is getting more and more popular, it is still rare to see men showcasing Burlesque act. There should definitely be more!

Finally, a special mention to the outstanding Master of Ceremony Johnny McGovern who kept us entertained all night long. The Art of the Teese was a delightful night. It revived the little Ava’s dream of performing on stage, whispered to her ears how life is meant to be full of glamour, feathers rhinestones and glitter. It put sparkles in her eyes despite the hardships of being a backpacker in the Australian El Dorado’s dead dream.

This site uses Akismet to reduce spam. Learn how your comment data is processed. 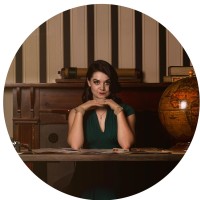 I am a retro French gal who has adopted the nomadic lifestyle. I am a space and time explorer. The Pinup Abroad supports never-compromising wanderers who travel off the beaten track with respect for the environment and other cultures. - Welcome to my blog, feel at home. -

[an error occurred while processing this directive]